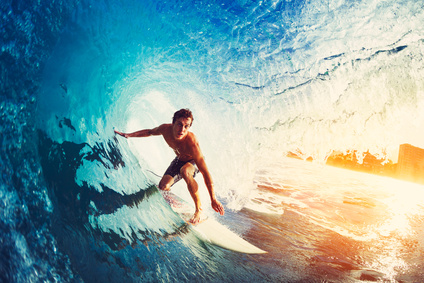 When you think about surfers, what exactly do you imagine?

Hippies traveling in vans, surfing on deserted beaches, being happy all the time by the simplicity of nature? Sonia Pieramico, currently finishing her bachelor in Psychology, investigated the different aspects of surfers’ identities in her research project, and showed that there may be more to it than just stereotype thinking. A total of 233 surfers from all over the world were surveyed and compared with non-surfers, and some of the differences which were found found, point out towards some rather thought-provoking interpretations…

A close bond with nature Comparisons were made between individuals who practice surfing and skateboarding, which for the purpose of the study can be seen as a land version of wave surfing. This part of the analysis included several variables: bonds with nature, spirituality and commitment towards their respective sport and lifestyle. Results showed that surfers appeared more conscious in their approach towards consumption (e.g., recycling, environmental awareness), and generally showed higher concerns for the environment resulting in feeling a closer bond to nature. Surfers also had higher levels of commitment to their sport than their skateboarding counterparts . Finally, surfers also reported significantly higher levels of spirituality than skateboarders.

One of the author’s interpretations for these differences, relates to the dependency of “wave riding” on environmental conditions such as the ocean’s tides, the weather and the structure of the beach. This may in part explain the higher bond and consciousness for nature, as it is a crucial element for making surfing even possible. This closeness to the environment, which many people have lost by conducting a more urban lifestyle, may also be the source of a higher spirituality. Regarding the significantly greater commitment found in surfers, one interpretation relates the lack of control that surfers have on the natural elements (e.g., weather, ocean) which makes their activity only possible under certain conditions. For example, a surfer may be forced to travel a long distance to reach a certain beach by a certain time in order to be able to wave surf, and without this level of commitment it would not be possible to “practice” on that particular day.  This level of dedication is therefore necessary, if they want to continue practicing their sport. To identify groups within our sample, participants were asked about their yearly frequency in surfing. On the basis of this, they were categorized into one of the following groups:

Results of the study showed that the Real-Deal-Surfers reported the highest scores in environmental awareness, together with a strong concern for disadvantaged individuals. This suggests a strong identification with humanity as a whole, and confirms the importance of a global harmony for this particular sub-group of our sample. Furthermore, Real-Deal-Surfers also showed the highest level of spirituality in parallel with the most pronounced surfer identity. The study therefore suggests that the more someone is involved in surfing and the surfer-lifestyle, the stronger the characteristics of the surfer identity are (e.g. environmental awareness, spirituality, etc.). It also shows that within our sample, the more someone connects with nature, the stronger he/she will identify with spirituality while also showing higher concerns for humanity.

According to the European Agency for Safety and Health at Work, stress is becoming an issue for more and more people, while, according to Hoffmann (1997) the most basic values of life are mainly practiced by small minorities, such as the traditional Native Americans. These basic values, according to Hoffmann’s analysis, are the interest and connection to nature, as well as the protection of our planet. In this study, we found that such characteristics are particularly present in the surfer community. The results suggest that positive outcomes may result from standing in close contact with nature, and confirm the idea that the bond to nature can lead to a higher sense of empathy towards the human kind.

Doesn’t that sound inspiring? Then why not putting this theory into practice by trying to surf a wave this summer! Sonia Pieramico has recently finished her bachelor in Psychology at the University of Luxembourg. The choice of this topic of surfers’ identity for her end of studies research project is due to her passion for surfing, and the real-life questions that emerged from it. She was supervised and supported by Dr. Isabelle Albert, Prof. Jaan Valsiner, and Stéphanie Barros Coimbra.

Sonia wishes to use this blog article as an opportunity to thank them once again for their support throughout her project.