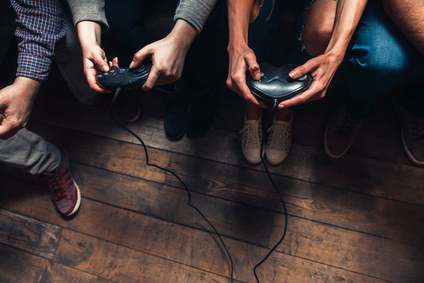 Do you play video games? If so, what type of games? Did you ever asked yourself what might be the resulting effects of engaging in them? A recent research study conducted at the University of Luxembourg focused on these interesting questions…

Considering the current popularity of video games, it is not surprising that both public and scientific attention have recently turned towards their contents. The reality is that more and more violence is depicted in popular video games, and this is often combined with female characters wearing sexually revealing clothes. Grand Theft Auto V and Dead or Alive are typical examples of games containing such violent and sexual contents. But does the exposure to sexualised violence in video games affect the gamers in any way?

To address this question, Martha Fernandez de Henestrosa, currently studying the Master in Psychology: Psychological Intervention, conducted an experimental study at the University of Luxemburg. With the support of her supervisor Dr. André Melzer, the goal of this study was to investigate the effects of sexualised violence in video games on players’ Rape Myth Acceptance (RMA).

What is Rape Myth Acceptance?

The concept of Rape Myth Acceptance refers to certain beliefs and attitudes, which people may hold in order to trivialise a rape act or to blame the rape victim. Concrete examples of such beliefs include “Any healthy women can resist a rapist if she really wants to”, or even “Many women have an unconscious desire to be raped”. Thus, the term Rape Myth Acceptance refers to the endorsement and the acceptance of these beliefs.

The effects of sexualised violence in video games on RMA To investigate the consequences of sexualised violence on endorsement of rape myths, 82 participants took part in the study (45 males and 37 females). All participants engaged in a twenty-minute video gaming episode of the fighting game DEAD OR ALIVE: LAST ROUND 5. They were also invited to fill out a set of questionnaires providing information about demographics, gaming habits, general gender role attitudes and finally beliefs concerning Rape Myth Acceptance (Illinois Rape Myth Acceptance scale). Participants were split into two groups: they either played a sexualised or a non-sexualised female character, and the game consisted of fighting against a computer controlled male game character.

Results showed no significant effects of sexualisation: participants playing the sexualised female character in a violent video game did not increase RMA compared to those playing a non-sexualised female game character. However, this does not necessarily mean that sexualised violence has no effect on RMA. One of the author’s interpretations for this result relates to the game’s level of difficulty. Indeed, since all 82 participants won the fight against the male game character, they may have felt that they were interacting with a powerful female character that was perfectly able to dominate her male opponent. This was true irrespective of whether or not the female character was shown in a sexualised way. The dominating female character may have therefore outweighed any effect of her appearance on participants’ post-gaming RMA, and this will be taken into consideration for further studies.

Interestingly, gaming experience (i.e., how often and how long participants usually play video games) turned out to be a crucial variable: participants who played video games more frequently were also more likely to accept rape myths after the video gaming episode. In addition, and perhaps not surprisingly, participants pre-existing gender role attitudes mattered: those holding traditional gender role attitudes as well as those who already had greater acceptance levels of rape myths were more likely to support rape myths after gaming. Above all, this study shows that much research is still needed in order to develop a better understanding of individuals’ acceptance of rape myths, and its relationship with sexualised violence in video games. The findings of this study certainly brought further interesting questions to the surface. For instance, what might be the resulting effects of players’ long-term exposure to sexualised violence in video games, on their endorsement of rape myths? Also, are players’ mind set the key to our understanding of RMA?

Presenting at an international conference A few weeks ago, Martha was given the opportunity to attend and present this study at the 67th annual conference of the International Communication Association (ICA), in San Diego, USA. This association of academic scholars is involved in studying, teaching and applying all aspects of human and mediated communication. As Martha outlines, presenting her Bachelors’ research project at an international conference was a great experience. She discovered how multidisciplinary and rewarding conducting research can be. Finally, Martha wishes to use this blog article as an opportunity to encourage other students and young researchers to pursue their research interests and aspiration.